What is NaNoWriMo and how it can get you started writing. I answered these questions for a publication recently and thought I would share. http://nanowrimo.org/

1. Which year’s NaNoWriMo produced the beginnings of The Mason List?
I started writing The Mason List in November 2011. I had always wanted to write a novel and had talked about it for many years, but I had never set down and worked on anything. When a friend told me about NaNoWriMo, I decided it was the kick in the pants I needed to get started.

2. Had you done NaNoWriMo before? And did you participate in any other years, after that crucial one?
Not before The Mason List in 2011. But I did a little bit later in 2015. I knew I wouldn’t finish. But I needed some motivation to get going on a third book. So I entered, knowing I wouldn’t finish. And it did help. I wrote some content quickly. So technically, the beginning parts of My Lucky Days was created in NaNoWriMo 2015.

3. When you embarked on the NaNoWriMo that led to The Mason List, did you have the plot already worked out in your head, or did it come together during the month of writing?
No plot. Actually, I had a different concept idea and switched about 48 hrs before starting NaNo. And with The Mason List, all I knew – it was going to be about two kids growing up to adults living on a ranch. I wanted the story to have the true “saga” aspect where the story actually had chapters where they were kids and then as adults.

4. What was the toughest part about NaNoWriMo for you? And the best part?
I edit as I go. (Didn’t realize that either until I started). So it was hard to write and move forward. But that is the good thing about NaNo. It forces you to move forward. And for a first time book, I think that is very important. People often get bogged down on chapter one and can’t move forward.

5. How much editing did you do after that first draft of The Mason List produced during NaNoWriMo?
I’m laughing reading this. So the NaNoWriMo draft of 50K words is not even close to what went to publication. I call that my 50K word outline. I worked on the story for 2 years afterwards. My first “final” was 140K words. And then after beta readers, I went back and did a painstaking word cut down to 118K words, which is the published length. I started the story in November 2011 and it was published in January 2015.

6. What’s the number one piece of advice you’d give first-time NaNoWriMo participants?
If you have always dreamed of writing something, give it a shot. You don’t have to show your NaNo draft to anyone. I didn’t. Not a single person ever read that one. But it helped me move forward. After I had at least something down, I wanted to make it better. I wanted to keep going. NaNo may not have created the published copy of The Mason List, but it was the catalyst that made it happen.

You’re funny.” He kissed my lips. “And beautiful. And sometimes I forget to breathe when I look at you.”
“You should put that in a song,” I whispered. “Might make you famous.”
“Maybe.” I heard him laugh as he held me a little tighter. “Or maybe I just want to say it to you.” 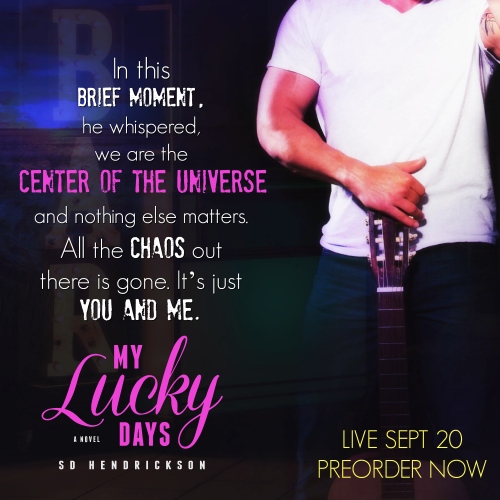 ★My Lucky Days★
#TeaserTuesday
He was an up-and-coming country singer.
She was the last girl you’d ever see in a bar.
But one night, under those neon lights,
Lucky and Katie found each other.

Beginnings are always exciting.
Always fun. Always hopeful.
Katie was in her last year of college.
Lucky was still playing local stages.
She fell for his voice. She fell for his words.
They fell in love.
It was beautiful.

But time changed their world.
She was alone. He was on the road.
Life happened.
And that love was torn apart.

One day, Lucky came back to Katie.
And this is their story.

**Goodreads Question**
“When writing The Mason List, did you worry about not fitting specifically into a certain genre?”

I always planned to write a “romance” book but I wasn’t really aiming for one genre or another. I know that can often be bad for marketing a book. What Genre is The Mason List? Well…it’s a Contemporary, Coming-of-Age Romance that crosses both Young Adult and New Adult with splash of Chick Lit.

I read all sorts of genre’s. I think for me, all of those blend together in my head. I didn’t have one genre in mind when I set out to write the story. I was just telling the story. Alex’s backstory took over a large portion of theme. That wasn’t the intention but it became 50% of the story.

My core concept: I wanted a story that actually showed the characters together as kids. I didn’t want the story to start as adults with a few sentences that indicated they grew up together. I wanted the reader to feel like they grew up with the characters. To me, the story of Jess and Alex only existed because of the adventures they had together as children. It wasn’t always perfect and they didn’t always make the best choices. But they were together and the reader got to experience those twists and turns along the way.

I worried when I released The Mason List that people would have issues with the first half of the book being told from the young kid perspective since I was marketing in the romance section of Amazon that is full of traditional style New Adult books. I say traditional, because there’s certain elements that are typically present in most New Adult books.

However, most people have embraced the book as a whole. They loved the epic style and didn’t have a problem with the page count. There’s been a few who didn’t like the first half – and I’ve had people who loved the first half but not the last half. I think some of the dislike does come from the jump in genres. I also know that everyone does not like the same books. I’m okay with it. I had fun writing The Mason List. And at the end of the day, I know the published story is the one that I wanted to tell for Alex and Jess. I stayed true to my original core concept.

Edits are over. Did I type that sentence?  I have moved to the layout portion of this project.  I spent four hours this past weekend just fixing the paragraph indentions for  the Kindle Mobi file:  from Word to  Writeway Pro to RTF back to Word to HTML file to Mobi file. Yes, that’s my actual work flow that appears to allow the insertion of the  first line indentions. Apparently, Writeway Pro doesn’t like the indentions on the first pass, but I need to upload into that program for the actual chapter layout with table of contents. Trial and error; push out to Kindle for a test. Ironically, this is supposed to be the easy one.  Smashwords is supposed to be the hard one. I am also doing the print layout, which may result in the death of my computer mouse.

With all of that said – Happy Thanksgiving!!  Hopefully, I will have more exciting blog reports as we get closer to the release date.

When I started writing three years ago (gasp!), I didn’t know how time consuming this project would eventually become in my life.  My cousin shared a quote this week.

“Writing a book is an adventure. To begin with, it’s a toy and an amusement; then it becomes a mistress; and then it becomes a master; and then a tyrant.  The last phase is that just as you are about to be reconciled to your servitude, you kill the monster, and fling him out to the public.” – Winston Churchill

I don’t know if I will ever feel the book is ready for the public, but eventually I have to let go and say enough is enough.

Thanksgiving Song of the Day: Better Days by the Goo Goo Dolls